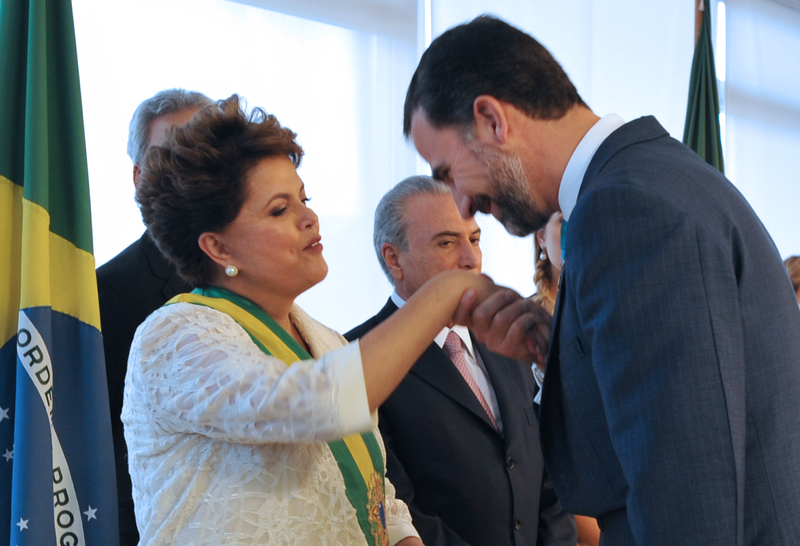 A look at the anti-monarchist sentiments flourishing in Spain by Juana Belén Gutiérrez de Mendoza.

Growing up in Spain in the Nineties and early Noughties, society taught you two main principles: ETA are evil murderers but at least they call before they bomb something, and King Juan Carlos I brought in democracy after the Franco dictatorship.I remember being excited when Prince Felipe married Letizia Ortiz, a commoner, three days after my 12th birthday. Now, ten years later, he’s been crowned king and has promised a “united, egalitarian society with a monarchy fit for the times”.

The current Spanish Royal Family have always been portrayed as humble and down-to-earth. The Prince of Asturias prize is as important as a Nobel. Queen Sofia is very good at travelling around to talk about world peace and Queen Letizia is known for campaigning for women’s right and health, as well as announcing winners of fashion contests. Only since the recession have journalists (and citizens) been interested in uncovering the elephant hunting, blonde lovers and other excesses that have largely come at the tax payers’ expense. The first blow to the Borbons landed in 2011 when Princess Cristina’s husband, the retired handball player Iñaki Urdangarín, was accused of tax evasion, and linked to a corruption case in their duchy in Palma – along with several politicians from the PP (the “Popular” Party, equivalent to the Tories with an ultra-catholic twist). Judge Castro, in charge of the case, has delayed setting a trial date until after Felipe’s coronation.

In other news, the PP government is busy preparing an act to ensure sure the now retired Juan Carlos de Borbon is exempt from any criminal charges. Many high ranking politicians, such as ministers and members of parliament (both national and regional), already have that privilege whilst they are in office, as does the ruling monarch. The PP “can’t believe” a law wasn’t brought in before to protect queens, princes and retired kings.

Meanwhile, a new party shines through the horizon, inspired by the 15M Indignados movement, whose basic principle is “bipartidism and austerity are lame but we’re not going to actually question the state and capitalism because we’re the over-qualified fallen middle-class so we deserve a piece of the cake”: Podemos (literally “we can”), lead by a young Politics lecturer with a pony tail, is calling for referendum to abolish the monarchy after scoring 5 seats in the Euro elections. PP and PSOE (basically like Labour) say its anti-constitutional, which it is, although that’s the usual line when politicians want to continue with their old ways.

Left-wing media estimates that 64% of the current voting age population were too young or hadn’t been born when the post-Franco constitution was approved by referendum in 1978. It is understandable that, after 40 years of post-civil-war fascist dictatorship, people get tired and will go for any bloke saying he’s going to deliver democracy. 30 years later, with the banks crash and rising unemployment, the monarchic bubble is bursting like construction on the Mediterranean coast.

People in Spain aren’t just indignados, they’re fuming. Politicians are constantly being uncovered as tax-dodging, expenses account abusing, public funding thieves. Banks are getting bailed out while most of the population are being made homeless. Most of the long term unemployed have been taken off the dole and those who are working are being increasingly exploited. Latin American and Eastern European immigrants, usually employed in manual labour jobs like cleaning or construction, are leaving. Some go home, others with Spanish nationality after many years of service join the young Spanish-born in London, serving coffees and sandwiches for some café chain in the City or cleaning a posh university after getting a masters degree.

The young Spaniards who stay are forced live with their parents well into their 30s, if they haven’t been yet been evicted by a bank. If the government thinks you’re “anti-sistema” you’ll get a suspended sentence for expressing your anger on twitter or get hit by a rubber bullet for trying to “assault” congress.

On the day Juan Carlos announced his abdication millions of people gathered around in their nearest town centre to demand referendum, with more protests in the following days. Twitter is full of #ref endumya, while a tiny contingent of fascists try to defend the monarchy. Of course the papers can’t stop harping on about the new Queen’s jewels and the establishment is busy trying to censor any criticisms, personal or political, against the new monarchs.

The Borbon’s inability to keep the peasants calm when shit hits the fan continues. Hopefully now the Spanish people won’t let the ghost of fascism squash their revolutionary spirit.

“King Juan Carlos’ abdication, like the election of Pope Francis, has served both institutions (monarchy and clergy) in a big marketing operation, trying to transmit hopes of reform to the public, but is far from the reality.

In the case of the king’s abdication and the debate of Monarchy vs Republic, it’s always a controversial subject that pops up whenever an important event occurs and a significant part of the population declares themselves republicans. I think it would be a step forward to get rid of the monarchy, although in many people’s eyes it looks like a Third Republic would erase all of the evils of this country in one go. Once again, far from reality…”

The action this morning, targeting business tycoons flying out of Farnborough, aimed to highlight the environmental damage being done by privileged groups generating vast amounts of pollution for the sake of luxury travel.

Anarchist students consider New Democracy’s intervention in Greek universities in the broader context of an EU-wide remaking of education along neoliberal lines.

Persons Unknown Festival returned after a 3-year break to the same venue it used for it's inauguration back in 2019.

The action this morning, targeting business tycoons flying out of Farnborough, aimed to highlight the environmental damage being done by privileged groups generating vast amounts of pollution for the sake of luxury travel.

Anarchist students consider New Democracy’s intervention in Greek universities in the broader context of an EU-wide remaking of education along neoliberal lines.

Persons Unknown Festival returned after a 3-year break to the same venue it used for it's inauguration back in 2019.