A history of trading protection for persecution.

For years, the UK government has known that a pandemic was the greatest threat to British security. A tier-one disaster with the highest possible impact upon daily lives.

It wasn’t terrorism or extremism or foreigners, it was an “influenza-type pandemic”.

Why, then, has the last decade brought a fast and deliberate reduction in public healthcare funding in tandem with the rampant increase in funding for counter-terrorism and counter-extremism?* Why has the latter dominated the discourse of security? Why did the British public falsely perceive terrorism to be the primary threat to their daily lives?

Weeks after the pandemic hit the UK, the most recent National Security Risk Assessment (2019) was leaked, revealing that a pandemic was the most likely and most potentially destructive risk. This news had a long history behind it. For almost two decades, a transnational pandemic predicted to have a similar fatal potential as Covid-19 has been a “level 5” threat, only sharing the top position with a nuclear or large-scale biological attack.

“The risk of human pandemic disease remains one of the highest we face… the possible impacts of a future pandemic could be that up to one half of the UK population becomes infected, resulting in between 50,000 and 750,000 deaths in the UK, with corresponding disruption to everyday life.”

“Pandemic influenza is recognised by the Government as the single most disruptive event facing the UK today.”

The 2015 National Security Risk Assessment identified “a major human health crisis (such as pandemic influenza)” as “one of the most significant civil emergency risks” by judgement of likelihood and impact. A pandemic was categorised as a “tier one” threat, and the report stated that its likelihood had increased over the years. By 2019 the risk had increased again. Meanwhile, alongside floods and blackouts, terror attacks have remained a level 3 threat, with a temporary increase to level 4 in 2014, and only briefly reaching level 5 in 2017. You can dip into any National Risk Register over the years and find examples predicting the most severe danger and disruption will be caused by an infectious virus.

Yet the budget doesn’t reflect the trajectory of its own risk assessment.

In 2015, the government cut £200m from public health. On the whole, across 2015/16, public health services have seen cuts of over £550m according to the BMA report. The Health Foundation reported that UK health spending overall had grown by only 1.1% a year during the coalition government, and 1.6% a year between 2014 – 2018. For context, the average annual growth rate for health spending from 1949 – 2019 was 3.6%. In 2019, the King’s Fund reported that the budget gave £3.3 billion less to public health in England compared with the previous year. In 2019-20, the public health budget faced £850 million in cuts, with an extra £100 million projected as lost due to no accounting for population growth, and an additional £50 million cut was expected in 2020/21. The spending round in 2019 announced a small increase in public health spending in line with inflation, which the Health Foundation said was “far short” of the £1 billion a year needed to replace a year’s lost funding. They reported that since 2015, the cuts to the public health budget have amounted to a 25% decrease per head.

Just over one year ago (on the 12th June 2019), public health authorities urgently called for extra funding. They found that an extra £3 billion per year would be required to start reversing the impact of cuts. All of this comes alongside the disastrous strategy of whittling the NHS down to its bare bones (a grim but thorough history can be seen at FullFact).

Meanwhile, in 2015, as public health reeled from its lost millions, the government raised counter-terrorism funding from £11.7 billion to more than £15 billion, a 30% increase. In 2017, a year which saw five attacks in London alone, the government proudly announced a £24 million boost for counter-terrorism policing. Spending announced for 2020-21 had promised to increase the budget for counter-terrorism in line with inflation (around 1.9%), with an extra £160 million on top. That doesn’t include the £750 million committed to policing in general, billions spent on creating 10,000 new prison spaces, a few hundred million for the Crown Prosecution and Ministry of Justice, and another hundred million to increase security technology in prisons. At the same time, the government have expanded their war-on-terror mechanisms with a new Commission for Countering Extremism, and a seemingly endless array of ornamental counter-extremism sockpuppets à la Quilliam, whilst teaming up with racist projects like (but certainly not limited to) Policy Exchange and the Henry Jackson Society.

Spending figures can be difficult to rely on within a nation whose government lies at least 75% of the time, but it’s clear that spending on counter-terrorism has consistently increased while public health grants have fluctuated by billions in a downward spiral ever since a pandemic became identified as a prevalent risk.

Simultaneously, the government’s presentation of dangers to the British way of life have been inordinately skewed to distort the realities contained in their own source material. Contrary to their own risk analysis pointing to pandemics as the major threat, public opinion has been moulded to unconditionally support counter-terrorism projects. The public face of national security primed Britain to feel terrorism, extremism, and cyber-security attacks were the greatest threats to their lives and lifestyles.

Researchers at LSE recently analysed public opinion data and concluded that “a pandemic was simply not seen as a major threat by the British public prior to 2020, despite its prominence in government security strategy”, while a domestic terror attack remained at the forefront of people’s minds. These graphs represent the popular opinion of the 2012 population, comparing the perceived severity of threats to security:

In 2018, IPSOS research found that two thirds of young people in the UK felt intense anxiety about terrorism. At the same time, an international analysis found that Brits feared terrorism more than any other surveyed nation, and they were the most likely to think a terror attack would affect them. 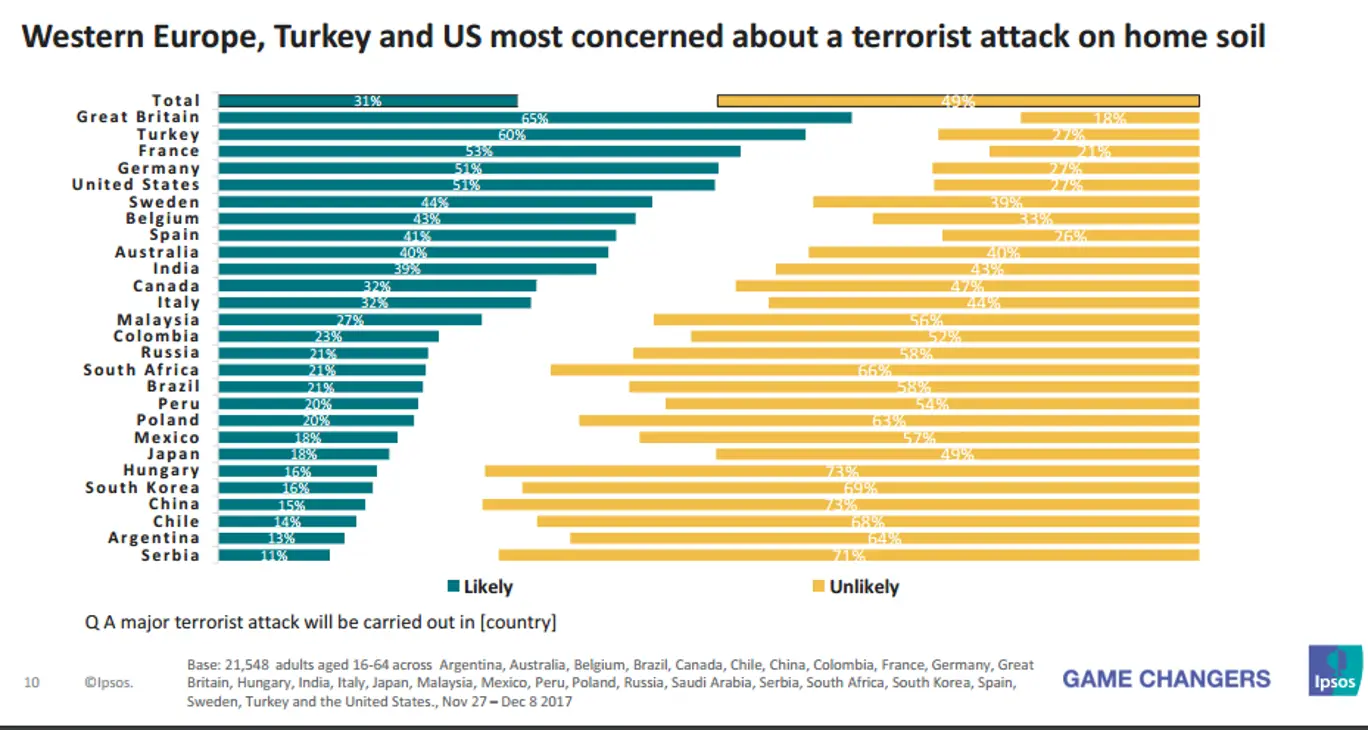 Counter-terrorism has become part of British daily life, we’ve grown accustomed to hearing “see it, say it, sorted” on every commute, cramming enough moisturiser for a two week holiday into a 100ml bottle, or being literally legally obligated to act as an agent of counter-terrorism while working as a maths teacher, a caretaker, or a librarian.

The MI5 publicly declares terrorism to be “the biggest national security threat that the UK currently faces” despite the risk register having listed it two levels beneath a pandemic for the past three years.

This isn’t an accident. This country is led by a man who does not appear to value the Muslim lives which PREVENT has explicitly targeted. The arms trade remains the most lucrative in the world and there are broad motivations for investing time and money in a campaign which legitimises extending authoritarian control, boosts popularity in the polls, bolsters colonial patriotic rhetoric, and so on, and so on. The marketing of counter-terrorism is a deliberate project pandering to public opinion and Covid-19 has revealed more of its flaws.

If public health had occupied such a present part of our consciousness, maybe we would have been better prepared to accept and fight a contagious virus. Maybe if a terror attack had been the defining event of 2020, people wouldn’t have spent the first month of this epistemic crisis waving their arms around shouting “but the flu kills more people every year!” Maybe CONTEST would have been about Covid and PREVENT would have been about a pandemic, and maybe for the last five years, kids in school might have been pulled out of their lessons for saying they can’t smell anything, or subjected to cruel isolation and police questioning for having a coughing fit. Maybe going to your mate’s wedding in Afghanistan would have landed you in a 14-day quarantine with an Xbox and 36 ready meals instead of a 28-day pre-charge detention with no phone calls whatsoever. Maybe hundreds of innocent people would still have been arrested and left in jail awaiting a trial that never came, but not for terrorism charges, for the good of public health! Great!

It might seem easy to say this from the situation we’re in now, but it is on record that the state knew they should have been stockpiling PPE and ventilators instead of armed response units. They knew they should have invested in hospital beds and epidemiologists, not invasive surveillance, facial recognition technology, and border controls. It costs about £3,304 to jail someone without a trial for 28 days. In today’s favoured currency, that’s about 16,500 surgical masks.

The national security strategy has concerned itself with terrorism and extremism to legitimise developing shady new defense technologies, investing in even shadier commissions and thinktanks, tracking and monitoring protest movements, and fortifying its precious borders. That this team of experts knew a pandemic of this scale could and would occur, and instead prioritised criminalising and persecuting refugees, Muslims, climate activists, antifa, and any such dissenting organisations, before deigning to chuck some loose change toward public health, confirms what we already knew about national security being a useless project gleefully eager to legitimise violence and authority. The strategy has now, once again, proved itself completely futile in protecting people from harm.

* Here, these two terms will be used interchangeably partly because it’s a fucking mouthful to keep saying both, and partly because the two projects intertwine in their being completely misguided and destructive in this context.

Louis further rounds up goings on across the pond.

In its latest action against Elbit Systems, Palestine Action stormed the Israeli weapons maker’s flagship premises yesterday, occupying both the inside of the facility and the roof to mark Nakba Day.

Farrah Akbik reflects on the aftermath of the shooting of journalist Shereen Abu Aqleh by Israeli soldiers and the incredible disrespect which has been shown.

Louis further rounds up goings on across the pond.

In its latest action against Elbit Systems, Palestine Action stormed the Israeli weapons maker’s flagship premises yesterday, occupying both the inside of the facility and the roof to mark Nakba Day.

Farrah Akbik reflects on the aftermath of the shooting of journalist Shereen Abu Aqleh by Israeli soldiers and the incredible disrespect which has been shown.